My daughter has a “Spell Bee” competition (this is a competition on getting spellings right..) coming up in her school in Feb. Yesterday evening my wife complained to me that she was not preparing in spite of her repeated pestering and demanded that I interfere.

I have always thought that my wife’s approach to getting things done was wrong (as with all women); she was too nagging. Whereas I am a strong believer of the fact that children should be motivated than forced upon. Well, here was my chance to prove the point; so I decided to have a  conversation with my daughter about this.

“How has your preparation been going on for Spell Bee?” I asked

She mumbled something in response; indicating that she wasn’t really enthusiastic about the conversation.

“You will have a surprise gift from me if you get the first prize” I didn’t have a better choice for motivating her than this age-old proven tactic of offering something.

Her eyes lit up briefly (OK, I was on the right track)

Now, I am waiting for to explode with joy, but…

“Not needed papa”, her response was cold and for moment I went blank

“Pink color shoes with golden laces..”, maybe I had not made it look attractive enough

“Listen papa. If I win the “Spell Bee” contest, I will get a reward of 12 lakhs. So we will have lots of money, we can buy whatever we want…..May be we can also buy bigger home, more comfortable car… Or expensive clothes…”

I had absolutely nothing to say; there was just a deep pain somewhere.

Few months back when I had been to my ancestral home, I found a “pencil-case” in an abandoned cupboard. I had won it as a prize in a competition when I was in 3rd standard. It was something unearthly to me and meant everything in the world for quite sometime. When I saw it after several years, I was amused at the details that flooded my memory- the smell of the plastic, the pictures on it, the glossiness of the packet, how it feels and everything about it. I brought it with me back to Bangalore and it’s lying on my table. A strange joy fills my heart whenever I look at it.

So much has changed in 30 years. I can understand generation gap, but can’t really understand it when our own children are generations away from us…

(Continued from the previous post…)It’s not just the trees alone that are intelligent. Something that was really amusing in the forest was the large creepers. If you look at them, you can see that they go from one tree to another. The trees are several meters apart and the creepers are several meters above the ground. 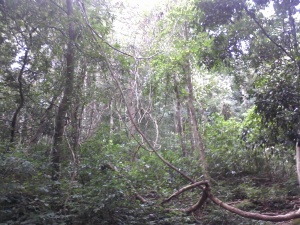 One thing that amused me was how these creepers reach from one tree to another. One theory that came to my mind first was that these creepers had climbed on to the trees when the trees were pretty small, and then they grew with them. But that didn’t relay look like a prabable theory, because in most cases it would have taken several years for the creepers to reach such heights. 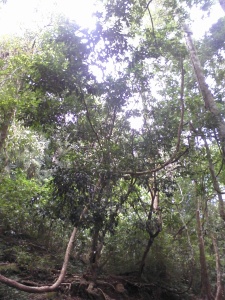 The most important observation against this theory was that it did not look as if this happened by chance. It looked very deliberate.

A friend of mine who lives near a forest area gave me this explanation. These creepers actually reach out to the adjacent trees first on the ground. Once they climb to a certain height, they tighten themselves and lift them up to the desired height.

This seems plausible, but stillone question remains? Why would they lift themselves up like this? Because the probability of being destroyed is very high on the ground?

Then the fundamental question remains, how do these creepers know that such a risk exists and then know what needs to be done and does it in such a brilliant way?

Do trees have intelligence? I think most of us will agree that they do. But can they think the way we humans think? Here are some examples from my recent trip through a forest. It’s really amazing and it’s hard to believe that they cannot think. 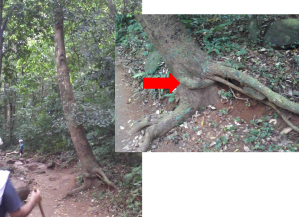 In the picture above, the tree is leaning on to the pathway, probably to get more sun light. But then the probability of the tree falling down is very high. To prevent that, the tree has put in a special root (see the red arrow) in the horizontal direction, to compensate for the tilt.

Here is another example 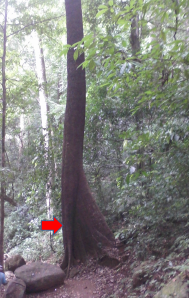 This tree too had the same problem. It is leaning on to the pathway. But this is very huge tree and it cannot use the same technique the other tree used.  So it did something different. It developed another set of fresh supporting roots (see the red arrow) that sort of acts like a pillar.

How do trees figure out such issues and take corrective actions?  We think our intelligence is in the brain, but where does the intelligence of the trees reside? Or are we mistaken, is every cell of our body carry that intelligence?

HeadtoHeart by Sajeev VK is licensed under a Creative Commons Attribution-Noncommercial-Share Alike 2.5 India License.
Based on a work at headtoheart.wordpress.com.