Adding a note to my earlier post Right brain or the left brain? Does it really matter?.

The ancient sages of India had explored literally everything that could influence the mind and conciousness positively. Looks like they were aware of the importance of coordinating the right and left brains for better functioning of the mind and better awareness.

There is a simple technique called Yoni Mudra (A mudra is a  posture  that is used to channel energy to a specific part of the body) which is used in meditation, to achive this. Externally this is meant to balance the energies between right hand and the left hand. But interally this helps to balance the right and left parts of the brain. Yoni mudra is performed using the hands as shown below in the picture. 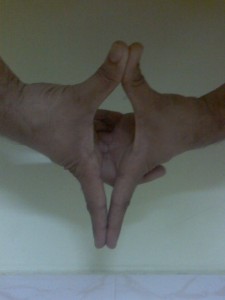 How the mudra meditation done?

Just sit cross legged with the spine erect, hold your hands in yoni mudra (thumbs are facing the ceiling and the hands below your navel with elbows bent outwards) and take deep, joyful ujjai breaths. Do few rounds. This can be integrated with other yoga practices, or can be done alone. Typically a mudra is practiced after raising the enrgy level in the body through yoga or pranayama or even a physical activity like jogging

When do you want to balance your left and right brains? When one of them is really dominant. That is either you are too logical and lack creativity or you are too sensitive and emotional and can’t approach things logically.

Note: In some texts, yoni mudra refers to a different posture. I think just a termonilogy issue.

2 thoughts on “What does yoga offer for right-left brain coordination?”

HeadtoHeart by Sajeev VK is licensed under a Creative Commons Attribution-Noncommercial-Share Alike 2.5 India License.
Based on a work at headtoheart.wordpress.com.